After a career consisting of mostly comedic splatters such as the ridiculous Violent Shit films and the even more insane Nikos The Impaler, german gore guru Andreas Schnaas decided to make an attempt at a serious horror film. A remake of the notorious 80’s video nasty Anthropophagous by the legendary trashploitation master Joe D’Amato.

The movie follows a group of germans on vacation at the italian countryside. When their car breaks down, they attempt to seek help at a nearby village. The place turns out be deserted, and filled with mutilated corpses. They soon discover to their horror that a deranged blood-drinking cannibal with a nasty case of skinrash is roaming the area, killing everything in sight. Alongside this story, we get brief glimpses from time to time of the killer’s past. 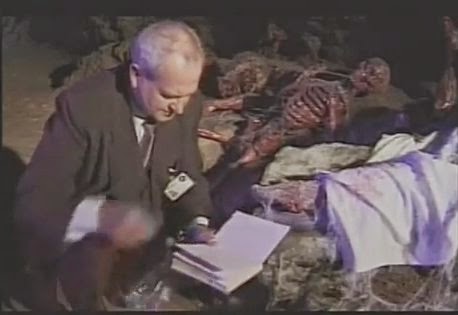 Much like most of Schnaas’ previous work, the film is a shot on video cheapie cast with mainly amateurs. The direction is nothing spectacular or ground-breaking, most of the effort seems to have gone into the special effects department. Schnaas’ best talent is putting together so bad it’s good gore scenes where he goes all the way. This man literally has no restraint when it comes to gore. Heads get ripped off, people get disemboweled, impaled or dismembered to the point where the body looks like roadkill. The infamous abortion scene from the original is recreated of course, with the b-movie feel cranked up to the max. If you thought it wasn’t possible to make infanticide funny, then film will prove you wrong. 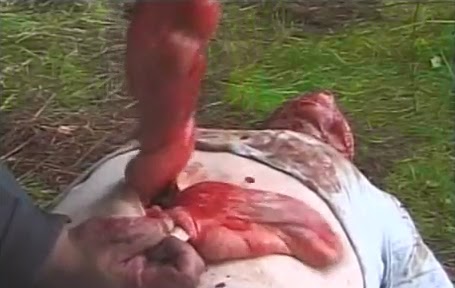 While the film is ineptly directed, acted and filmed in almost every possible aspect, I have to give Schnaas kudos for trying his best to make a good horror film. While he wasn’t successful, I can definitely see that the effort was made. There are attempts at horror and suspense here. The film tries to keep the killer mysterious, not revealing his face until the end. (So why put the guy's face on the f-ing cover then?)

It isn’t easy for anyone to make a full-length feature when you have no resources or professional crew members. The man’s films is hated by everyone and their grandma, most likely don't make much money, but he never gives up. All his determination and persistence is quite admirable.

I can see that the director wanted to tell a dark and grim story about the loss of humanity and how gruesome and brutal nature can be, particularly in the flashbacks. The killer was originally a father and husband who was forced to eat his wife and child when he got lost at sea. All the months of isolation, boiling heat and traumatic losses turned him insane. A pretty tragic and gruesome fate. The kills are very savage and brutal as well, illustrating how inhuman and primitive the killer has become.

However, the cheesy and over the top gore effects create a jarring juxtaposition that make it impossible to take the film seriously. It lowers the quality, but increases the entertainment value. Overall, it is a well-paced and highly entertaining film, even if it is for the wrong reasons. I have always liked his films, cause despite the low quality, they are never boring. The man delivers gore, sleaze and trash by the bucketloads and always leaves me wanting more.
Posted by Alex. G at 11:49