Squeak the mouse review (And the possible inspirations for Itchy & Scratchy)

Okay, time to try something new. I have been playing with the idea of reviewing lesser known and bizarre comics and films for some time now. And I guess today is as good day as any to give it a try. Let's see how this goes and if it's something people wanna see more of.

For years I have had a morid fascination with Itchy & Scratchy. The hyper-violent cat and mouse cartoon from The Simpsons. Basically, it’s Tom and Jerry if directed by a splatter movie director. These two are some the shows oldest recurring characters, dating all the back to the Tracey Ulman days and have become nearly as popular as the Simpsons family themselves. 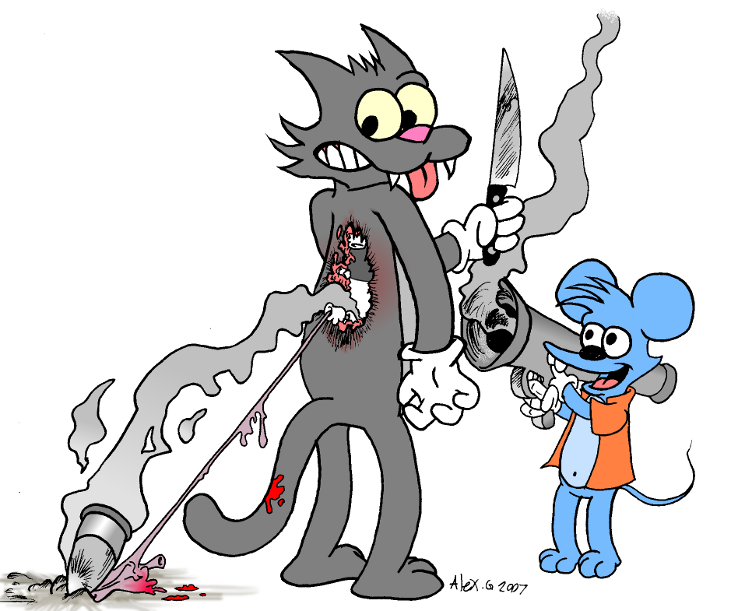 In the early days of the internet, my fascination for this violent duo drove me to searching high and low for any information about them. One site in particular I recall was a site listing Itchy & Scratchy’s possible inspirations. Aside from the obvious Tom & Jerry I recall it mentioned Herman and Katnip, Kit ’n Kaboodle and Squeak The Mouse.

Well, I have now finally seen all the above examples and while this was primarily going to be about Squeak, there's no harm in sharing my own thoughts on the others 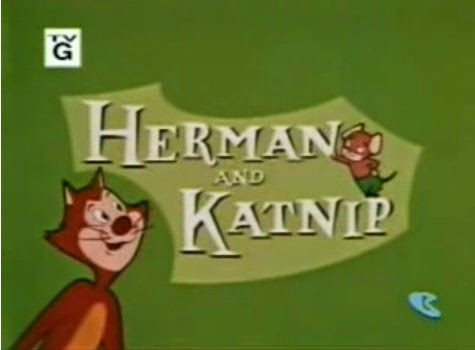 Herman and Katnip was a fairly generic Tom & Jerry imitation. Most of the cartoons dealt with a somewhat dim-witted cat chasing a group of mice. But they are always rescued by their cousin Herman, a resourceful city mouse with a Brooklyn accent.
This one has actually been confirmed by David Silverman to be one of the inspirations for Itchy & Scratchy. It’s also been said to be very violent for it’s time. This baffles me, as I have now seen all of the H&K cartoons and none of them are really any more or less violent than your average Tom & Jerry or Looney Tunes cartoon. The closest thing to an exception I could find was a scene where Katnip gets split in two with an axe. But without blood or pain, there’s no real sense of brutality. And thus making it no more violent than anvils to the head or other typical cartoon slapstick. 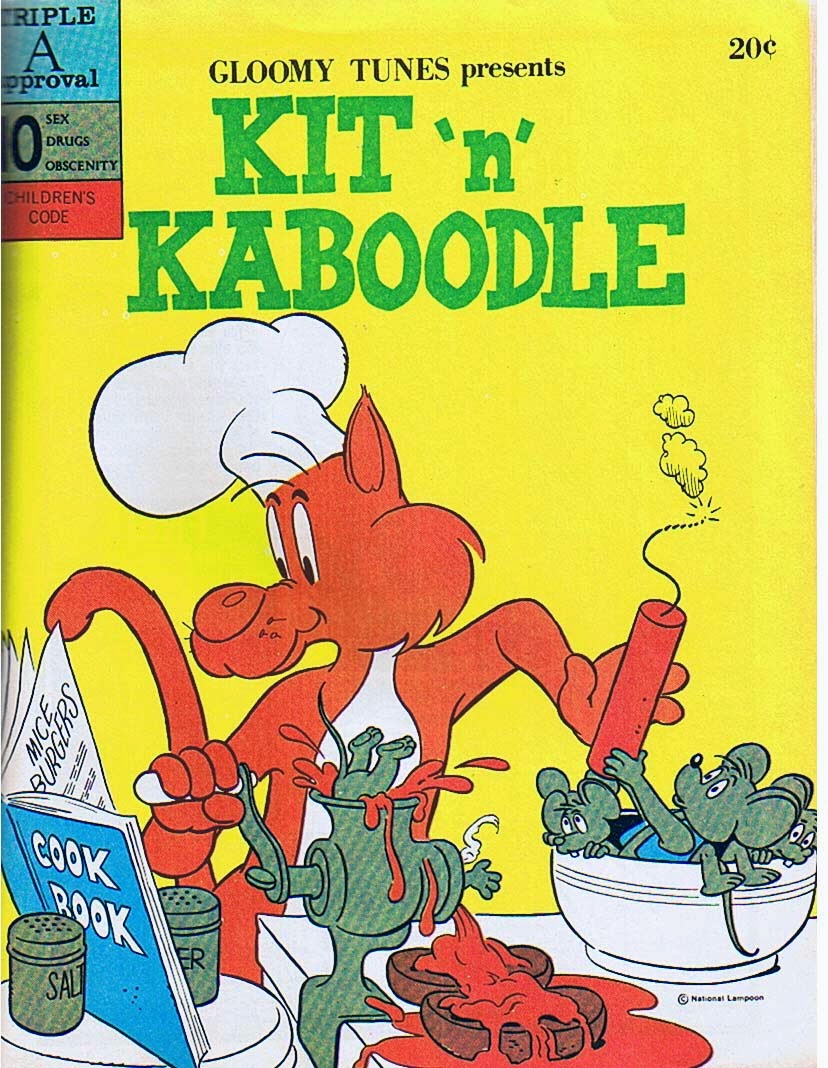 Next on the list is Kit ‘n Kaboodle. A cat and mouse comic from a old issue of National Lampoon Magazine. The story deals with the Sylvester recolor Kit chasing a group of mice and causing lots of carnage.
This one seems much probable for being a inspiration for Itchy and Scratchy. The leader mouse even wears a blue west(Itchy switched back and forth between wearing a blue and orange west in the early seasons) and there’s blood and death. The carnage is caused by chainsaws, piranhas, knives and gunshots to the head. All which Itchy and Scratchy also ended up using. For more, visit The United Provinces of Ivanlandia. They have scans of the whole story. 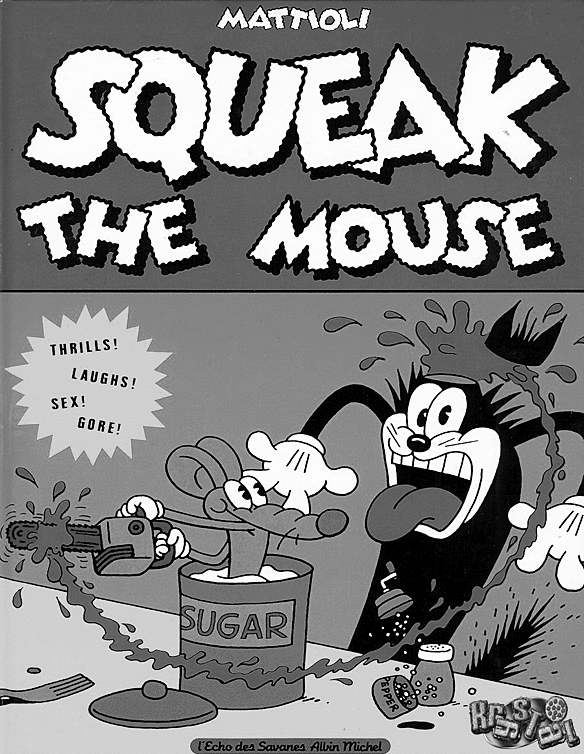 And at last we have Squeak the mouse.
A 80s underground comic which took the bloody cartoon mayhem to a whole other level, exceeding even Itchy and Scratchy.
The comic features the mouse Squeak as he tries to escape the clutches of unnamed black cat. After suffering though several beatings, the cat actually succeeds in killing the mouse.

But hold on, we’re not done yet. Up until the mouse’s death, the comic hasn’t been that much gruesome. Except for a explosion turning the cat into a skeleton the violence hasn’t been much worse than regular cartoon slapstick. 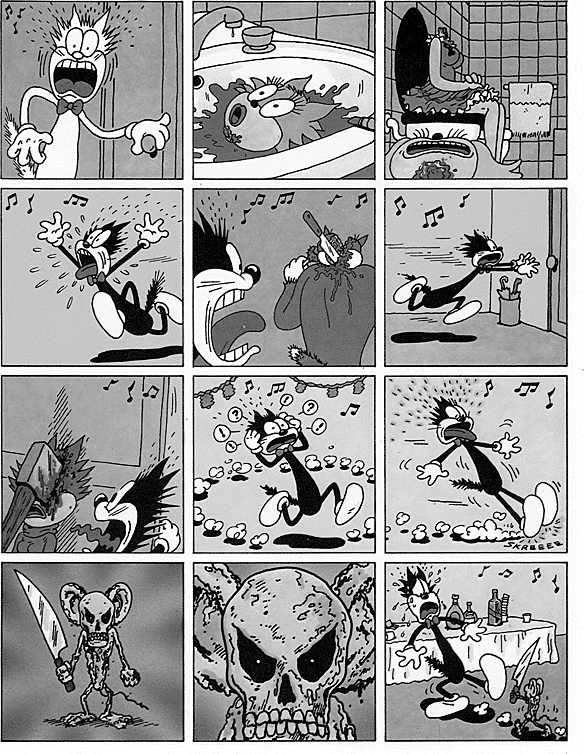 In the next part, the party victims become zombies (cause why the hell not?) and try to kill the cat. He barely survives this ordeal as well, taking down all of them until only the mouse is left which once again fails in completing his task. This time being reduced to goop. 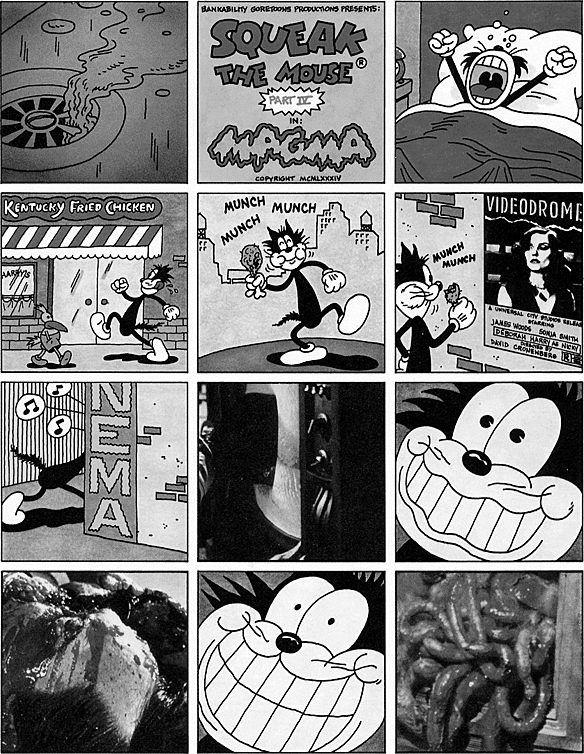 And thus ends probably the most messed up story I have seen in my life. And that comes from someone who have seen all the Violent Shit movies! It started out decent, but quickly became more and more and more nauseating and grotesque. Not sure how to describe this mess, a funny animal comic written by Patrick Bateman? The weird combination of pornography and extreme violence sure made it feel something like that.

The art style is simple but very reminiscent of golden age cartoons like the works of Fleischer Studios and Tex Avery.
It also seems to take place in some kinda of Roger Rabbit-type universe where animated and live-action characters coexist. As there are times when the cat watch horror films which are illustrated with movie stills pasted into the comic, adding another unique feature to this already bizarre story. Speaking of Roger Rabbit similarities, this comic also features cameos by famous toons such as Mickey, Donald, Felix the cat and Tex Avery’s wolf character. (Was this guy ever given a real name?)

It also made me think that one of the reasons that stuff like Itchy and Scratchy or Fritz the cat is so fascinating(At least back in it’s day) was that they took something cute and innocent like funny animal cartoons and corrupted it with gore or sex. Resulting in a freaky yet original combination that people weren’t used to seeing. And in my case is probably the reason why I was drawn to that stuff.

I suppose it can be linked to the old tradition of looking at roadkill, it is weird and grotesque and yet you can’t take your eyes away from it.

But now things like I&S and Fritz have themselves become tame thanks to shows like South Park and Superjail, which continue to push the limits more and more with each episode.

In the case of Squeak however, it is still pretty weird and deranged even compared to todays standards. As I have yet to see any comic or cartoon with a combination of gore and obscenity more insane than what was in that book.

But that’s not all folks. There is a second issue of Squeak The Mouse.